The MGB is and was one of the most iconic British sport vehicles ever made. Manufactured first by British Motor Corporation (BMC) and then by British Leyland as a soft top Roadster. It remained in production with 18 years with hardly any alterations made. Most modern day sport vehicles are based off this classic design. The Roadster was the first MG to be made in the famous Abingdon factory in Oxfordshire, England and continued from 1929 to 1980, when the factory shut down. 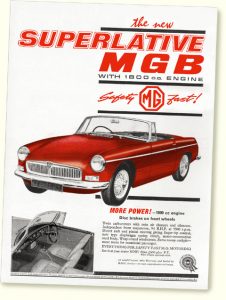 The design for the MGB was innovative and modern for its time. It had a lightweight design that reduced manufacturing costs and yet didn’t take away from how the vehicle performed. The suspension was soft for a smooth ride and the engine was large, giving it that extra speed the sporting motorists wanted and surpassing its predecessor the MGA. The MGB Roadster became a major rival for another British sports car series, the Triumph TR.

Popularity for the MG brand grew to other countries and the need to export became apparent. The problem came when the US wanted the car. They had a lot of safety measures that needed to be met. The dashboard had to be altered from solid steel to plastic, the bumpers had to be changed for impact safety. The headlights were too low, emissions were too dangerous and instead of redesigning the car for the US, British Leyland just replaced what needed to be replaced. They even raised the car up an inch so that the headlights weren’t too low. The problem with their “solution” made the steering problematic and frankly, the car didn’t perform as well as it could have.

While originally, the MGB Roadster had minor problems in the US, it eventually became known as a classic. Even today, after the factory is shut down and no more are being produced the drivers of the MG brand have come together to preserve their history by forming a club called the MG Owner’s Club. Passing down history and the love of classic sport cars is a great way to build community and belonging.

Check out AlphaCars’ MGB Roadster on our website by clicking the link below.

Since the MG is an iconic British sports car it makes sense that the cars would be used in movies. Here’s a small list of films the MGB has been in: 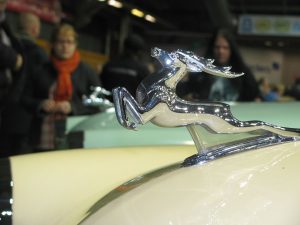 Between 1956 and 1970 Gorky Automobile Factory or GAZ, located in the Soviet Union, produced a 3 part series of vehicles all variants of the name Volga GAZ-21. Each vehicle in the series has similar features such as the deer mascot on the hood and the raised suspension that shouted to the people that this car was “above it all”. Each model in the series became one of the most expensive vehicles on the market, drawing those with money. It didn’t take long before they became an icon for the upper class. If one held any sort of position in key authoritative positions that the communist party held to a high standard, they most likely drove one of the Volga GAZ-21 models. Sometimes the exports didn’t do too well because of the symbol of authority it was for those in military and political positions, so Volga got smart and made several sub models. Nevertheless, these are the cars for the elites.

The very first in the Volga GAZ-21 series was nicknamed “the Star” because of the chrome star in the center of the grille. 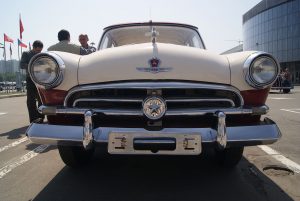 The Star was the very first vehicle with an automatic transmission to be mass produced. However, the novelty of the new transmission and all the fancy bells and whistles of the first series didn’t last long. For all it offered the driver, it wasn’t practical. It seemed as if the designers didn’t account for how long it would take to make the vehicle. In order to make the chrome features (and there was a lot) on the Star, it required an excessive amount of manual labor to put them there. The designers also seemed to forget that most people had to work on their own vehicles because there was a lack of qualified service shops in the country. Another problem with the new automatic transmission at the time, was the special fluid it required. Most owners either didn’t know how to work on the new design or weren’t able to obtain the fluid easily.

Towards the end of it’s short life Volga GAZ designers decided it would be easier to sell their luxurious vehicle if it were back in manual transmission, so they produced another round of The Star, this time with the more familiar manual transmission. Even with how expensive these vehicles were priced, it wasn’t profitable for the Volga brand and the GAZ factory. Reverting back to the manual transmission seemed to keep Volga GAZ afloat for a while, but it was a band-aid on a gaping wound. In a last ditch effort, they began making taxi editions of the Star and exporting the vehicle with multiple sub models. In the end of it’s life a total of 32,000 of the Star was produced.

A new year, a new series, a new look for the Volga GAZ. Officially, the base model for the second model in the series was called GAZ M-21I, but it was nicknamed “the Shark”. Following in its predecessors footsteps, the second series was distinguished by its front grille that changed to a 16 vertical slits of chrome. Producers thought it might be time to upgrade their original design. 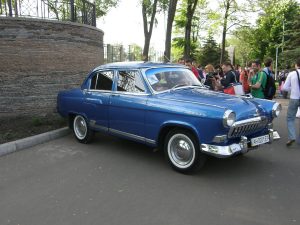 The designers of the Shark wanted to keep their second series for the upper class, but realized the way to do this was not to over complicate the system that people were already familiar with. The change of the look and design became more popular in the market as time continued on. They still made taxi versions, this time with the second series, which did better than its predecessor. The export of the Shark also made an improvement in its export models giving the engine 80 hp. During the Shark’s years in production several more sub models were produced with slight variations, but none as famous as the original second series Volga GAZ M-21I Shark. The last year of manufacturing the designers even got rid of the iconic deer mascot on the hood of the car.

Welcome to the last of Volga GAZ M-21 series. Nicknamed “the Baleen” for the final grille change that looked like the food filter in a whale with its 36 slit design. 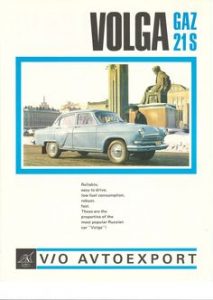 Surprisingly, it was this grille design that would survive the longest. The designers also made the Baleen look more modernized by making the body sleek. They did this by first, getting rid of some of the bulkiness of the bumper by taking away the over riders (the vertical pieces of chrome around the front bumper in previous photos). They changed the interior to wool seats and a leather headliner. The engine also went from 80 hp to 75 hp. While some didn’t like the reduction, it made cruising around just fine. Once again, several sub models of the Baleen were made and used as taxi cabs. The most popular of the sub models was the diesel fueled model. The hp went down to 68, but no one seemed to mind with the reliability the diesel edition made.

This three part series played a large role in the upper class arena for the Soviet Union. It was a mark of authority and power in the Soviet Union, sometimes even driving fear into the export market and at first hurt the profit for the brand. It certainly shows that even a vehicle can have influence on people. Here at AlphaCars we are proud to have a piece of history. Take a look at our very special 1968 Volga GAZ M-21 Baleen. Follow the link below see for yourself. 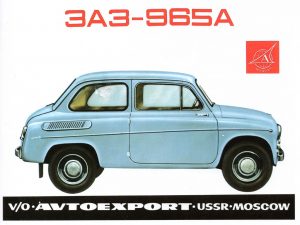 The Zaporozhets (ZAZ) was a series of rear wheel drive cars produced by ZAZ (Zaporozhsky Avtomobilny Zavod) factory in Ukraine. Different models of Zaporozhets, all of which had an air-cooled engine in the rear, were produced from 1958 to 1994. They were in high demand both in cities and in villages because of how affordable they were for the common people. In fact, the design was intended to become the “people’s car” just as the Volkswagen Beetle and East Germany Trabant. However, it did not become as common on USSR roads like the Trabant had been in East Germany. The problem was that the ZAZ factory could not produce enough cars to satisfy the ever-growing demand.

Zaporozhets are known for their remarkable performance on poor roads due to its independent suspension and engine sitting on top of driving wheels, which makes them carry 60% of total car’s weight. Another interesting feature of Zaporozhets is its flat undercarriage; this way it is almost impossible to break something when going off the paved road. If one still managed to get stuck somewhere, ZAZ 965’s curb weight of only 665 kg (1466 lbs), which makes it easy to get out of the car, lift it, put back on steady surface and continue the journey.

The first car that drove off the ZAZ factory gates in 1960 was the ZAZ 965. Two years later in November the ZAZ 965A was produced as an improvement on the original. The improvements were simple and made the Zaporozhet easier to maintain. This was a necessity because auto shops were scarce and Soviet drivers were expected to maintain their vehicle. The engine placed in the ZAZ 965A was a 90-degree V4 layout, which made it more practical for the everyday user, especially throughout the harsh winter. For many Soviet people, because of the low cause and simplicity in design, the ZAZ 965A became their first vehicle.

When production of ZAZ 965A ended in 1969, only 322,116 of them were built. Out of this really small amount, only a few survived. Nowadays original ZAZ 965A is truly a rare find even in Europe.